The Avengers Weekly: "The Comic That Never Was" 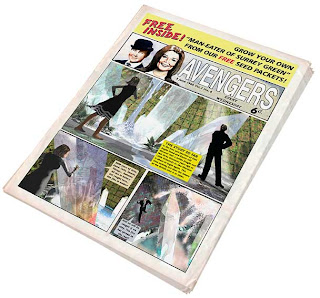 The 1960s was a Golden Age for children’s comics in England… and none of them offered as many free gifts as the Avengers Weekly did.

In issue 58 (Vol. 1 No. 6) there was the “Grow your own Man-eater of Surrey Green from our Free Seed Bags.” “Requires a high protein feed” it said on the packet. Too bloody true. Within a couple of weeks I had fed half the undesirables of the village to it and it was still snapping for more. In the end I had to take the axe to it.

Then there was the “Doctor Armstrong’s United Automation Pen… One click and you will never be alone again.” They weren’t joking. I was stalked for the next couple of weeks by a stiff-walking geezer in a black raincoat, black hat and an unnervingly shiny face. I was almost relieved when Danny Taylor nicked the pen one day. He must have carried it everywhere with him because, when they found him, it was lying nearer his body than his head was.

One of my favourites was “The Rotters” free gift, issue 61. “Sprinkle the contents into water and load into your water pistol. Removes unwanted trees…” And wooden garden fences, sheds, gates, pavilions, timbres to the neigbours house, two listed Elizabethan houses, a cherry orchard and five square miles of protected woodland. Whoops.

Then in issue 72 there was the “Take Me To Your Leader” carrying case with the combination lock. We gather Larry Lang must have got the combination wrong once because it not only took out his house but half the street in the explosion.

Sadly, as the sixties drew to a close so did the Avengers on TV and the Avenger Weekly. Much had changed in our little village over that decade. There was still a crater where Larry’s house used to be. The forest surrounding us was just heaps of saw dust. The Man-eater had germinated and now the population had dwindled from three hundred to five… and that included me.

I kept all my Avenger Weeklys neatly in a pile and they would be worth a fortune now. However, I spilt Issue 97’s free gift, “Get-a-Way” Chameleon brand Vodka, (“Bath in this and turn your back on all your troubles”), over them and have never been able to find them since.
Posted by Ian Duerden at 11:44

Tales of the Clockwork Empire